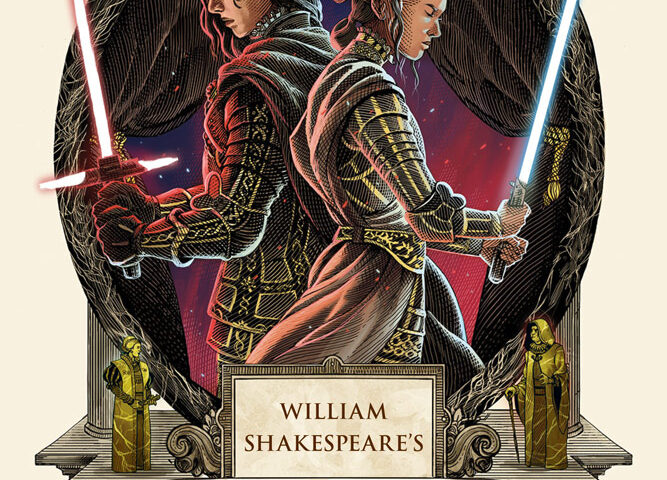 The final entry in Ian Doescher’s William Shakespeare’s Star Wars series, The Merry Rise of Skywalker, is released today and is the final chapter of Doescher’s take on the Skywalker saga. Like the previous eight iterations of the New York Time’s Best Selling author’s interpretation of Star Wars, the book converts Star Wars into Shakesperian iambic pentameter. Not an English major? No problem! Ian has you covered, with the right amount of complexity and accessibility that his award-winning books are known for.

The secret recipe to Ian Doescher’s success lies in his attention to detail. For instance, almost every line in The Merry Rise of Skywalker is ten-syllables long. Think about that for a moment: Doescher is re-writing The Rise of Skywalker in Shakesperian style, staying true to the spirit and essence of these beloved characters, and keeps the lines to ten-syllables long. It truly is staggering.

He also incorporates several stylistic choices to engage and entertain the most nuanced of literary critics. For instance, every moment of dialogue from the Resistance’s best pilot, Poe Dameron, incorporates prose or poetry from the works of Edgar Allen Poe. Whether you have read the complete works of Poe, read “The Tell-Tale Heart” in high school, or know what a raven is, Doescher is ready to entertain, enlighten, and have you smiling.

And the best part is, you do not need to be a fan of Shakespeare or his style to enjoy The Merry Rise of Skywalker. Because for Doescher, it is all about the characters. What Shakespeare did better than anyone was to bring the audience along as we would walk in the footsteps of these larger than life icons of the stage. And in Doescher’s hands, the same is true of his take on The Rise of Skywalker. He interprets the grunts and growls of Chewbacca, gives insightful internal monologues from Rey, General Leia, and perhaps most importantly, Ben Solo after his turn to the Light. To be honest, it’s needed, and give more depth to these characters in Episode IX.

The Merry Rise of Skywalker is a brilliant look into the soul of these iconic Star Wars characters, providing more nuance, dept, and context for the narrative of the last chapter in the Skywalker saga. It’s beautifully well-written, humorous, and is an insightful critic of the mythology we know and love. While I am disappointed we will not get more of Doescher’s take on the Star Wars saga, The Merry Rise of Skywalker is the perfect capstone to the work of this modern-day literary genius. I could not recommend this more highly.

Purchase your copy of The Merry Rise of Skywalker here

Note: A big thank you to Quirk Books for providing an advanced copy to review.