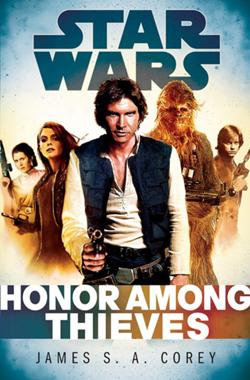 Star Wars Empire and Rebellion: Honor Among Thieves is the latest EU novel to feature Han Solo in a somewhat ‘solo’ novel of his own. Han takes center stage in the first Star Wars novel from James S. A. Corey (pen name of writing duo Daniel Abraham and Ty Franck), and it certainly does not disappoint. Full of fast paced action and Han Solo witticisms, this is a novel that fans of Star Wars’ most famous rogue smuggler will not want to miss.

Taking place after the battle of Yavin, Han is tasked with extracting a rebel spy from the middle of the Empire in the Saavin system, the planet Cioran. The spy, a new Star Wars character named Scarlet Hark, is deep undercover, and quickly excahnges barbs with the Corellian once they meet up early in the novel. The first adventure leads to a second, more intriguing mission that introduces a new weapon I won’t give away. Suffice to say, it could have a huge impact on the burgeoning Rebellion, and may strongly influence the war. In spite of Han’s reluctance, he agrees (with the encouragement of Princess Leia) to assist Scarlet, and Chewbacca fires up the Falcon for another adventure.

One of the most engaging things about the novel is that it requires almost no knowledge of the Star Wars universe in order to enjoy it. It really felt like the Brian Daley novels of 1979, with characters that slip away from the mold of more recent EU characters, and, to be honest, it was a refreshing change. Many of the characters are legitimately rough around the edges, without feeling trite or forced, and I was pleasantly surprised. The most significant one is Baasen Ray, a smuggler from Han’s past that keeps Han on edge just enough to make things interesting. He was much more interesting than Scarlet Hark, who wasn’t a bad character, but did not feature much new or interesting. She is tough, alluring, and resourceful, but there isn’t any real tension of any kind, beyond some infrequent, surface banter. She gets lost in the middle of the book, and almost feels like an afterthought.

The character of Han is fascinating here, as he may be as rough around the edges as I have ever seen him. He has a cavalier (if not somewhat alarming) reaction to violence that I did not expect, but since the novel takes place so close to Episode IV, it makes sense, and really brings to fruition the vibe of a space pirate who would shoot first and ask questions later. There is even a humorous nod to the whole “Han shot first” mantra so many fans (including myself) subscribe to.

This is certainly not the Han Solo that falls for Leia in The Empire Strikes Back, but we see glimpses of him, without all of his cards being shown. One could even argue that he feels more like the Han Solo of A New Hope than he did in Scoundrels. A unique take, to be sure, and one that may meet with some friendly debate among Star Wars fans, but certainly worth reflecting on after a close reading.

We also meet Hunter Maas, a thief who plays an important role in the plot, but is probably the most annoying EU character I have ever encountered. This is most likely by design, and some readers will find him amusing, but I’ll take Jar Jar Binks over Hunter Maas any day. Maas’ third person banter is grating, distracting, and supercilious, and it certainly demonstrates the power of language to define a character for an audience. Leia, however, is much more engaging, and reminded me of the characterization Martha Wells employed in Razor’s Edge through strength, poise, and determination. We don’t get to see as much overt vulnerability as we did in Wells’ novel, but this book is a vehicle for Han Solo, so it works here. She and Han do have some entertaining exchanges, but, they do not come close to the sexual tension they will become famous for later in their arcs.

James S. A. Corey has created some interesting and exciting moments in Honor Among Thieves, and walks confidently in the footsteps of the Star Wars saga. You sometimes forget that any EU novels exist at all, and this is a unique and interesting approach that left me hoping we will see more from James S. A. Corey. It really felt like a novel from the late seventies, and while it does not offer any new characters of note, the characterization of Han Solo, complete with charm, smugness, and potential for becoming something greater make this a novel for not only Han Solo fans, but for readers wanting to experience the EU for what may feel like the first time.