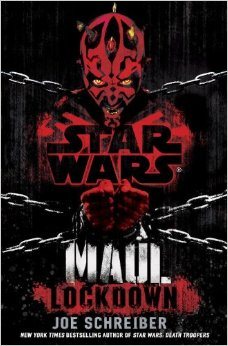 It’s been about a year or so that I’ve gotten back into reading EU books. I’ll pick up one here or there, maybe something that looks interesting or a newer title centering on smuggler and his famous smirk. I’m a big reader in general, but I’m a picky reader. If a book hasn’t caught me at around 50 or 60 pages in I set it down. So when it comes to Star Wars EU novels I’m even more so. Most titles center on our big three joining together yet again for another adventure, or a single character secretly venturing on a backstory bounty mission and allowing us to ride along with them. Last year I read the now famous “fan favorite” Darth Plagueis and fell over myself with it’s grandiose language, tight story, and deep character development. I’ve been singing it’s praises ever since, not because it such a wonderful Star Wars novel, but a great science fiction read for any sort of fan.

First off, I’ll admit I’m not a huge Darth Maul fan. He’s dark, silent, and deadly in Episode I and thanks to the master who is Ray Park, the villain took on not one, but two Jedi at the same time and barely broke a sweat. Although very cool to see on screen, personally I felt he was shamefully under used and quickly (Spoiler alert!) killed off! That was it. Done. Hello, goodbye.

My second meeting with Maul came in bits and pieces as of recent. I’m just venturing into Season 4 of Clone Wars and haven’t had the time to devote to getting to his arc yet. (Two jobs, four kids, and writing books of my own has kept me very busy.) This is not say I don’t like Maul.

Enter: Joe Schribner’s Maul: Lockdown, a self proclaimed sequel to the grand feat that was Darth Plagueis. I haven’t read any of Joe’s other SW tales, but knew of their dark nature and premise and they sounded great. Going into Lockdown I only knew a few things. It was a story set after Darth Plaguis, it centered on a personally obscure character in my mind, and written by a horror novelist.

So I began reading Lockdown almost blind, aside of what I just explained. Chapter one of this book literally knocked me out! The action and descriptions right off the first page were so intense and in your face, I had to reread the synopsis of the book. What was I in for?

In a word, awesomeness. (If that even is a word.)

From then on the story was laid out before me in literal bites. Maul as an EU character and even further, a Star Wars Character rose to new heights for me. I kept envisioning Ray Park in full makeup, dancing and flipping around splattered blood and broken bones all the while keeping a calm and cool that makes the Dark Side look ever more tempting! (I wonder if that was the author’s idea…)

We are introduced to small prison hovering the far reaches of the known galaxy and broadcasting the most vicious battles this side of your local cantina! All calculated and controlled by a vile and head strong warden pulling the strings like an professional violinist! But that’s not all, Maul has to contend with. Prison gangs, assassinations, corrupt prison guards, crime lords, and more than a few surprises all block his way to his ultimate goal set I motion by his Sith master and then even that is a secret to Maul himself.

Schribner does and incredible job of yanking us from chapter to action packed chapter, but it’s not mindless fight scenes.With each one there builds an atmosphere of mystery and an internally game of who’s really who of the universe, something you don’t figure out until the explosive ending.

It’s difficult not to give away too many details, but I’ve found a new respect for the character of Darth Maul. He’s sleek, brutal, and wicked smart here and if your any sort of fan of the character you won’t be disappointed with this novel.

I rate this novel Four out of Five missing teeth!

Listen to our Book Chat with Joe Schreiber himself!

Thanks to Del Ray Publishers for the advance review copy.