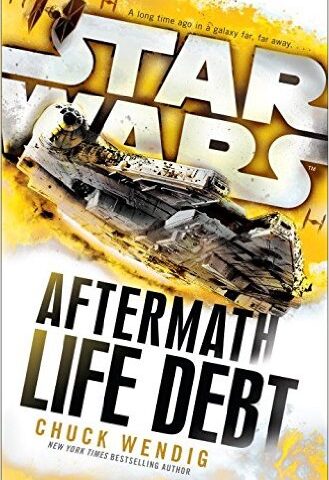 Aftermath: Life Debt is the second novel in Chuck Wendig’s post Return of the Jedi trilogy, which continues the story of what happened to the galaxy once the second Death Star was destroyed by Lando Calrissian and the Rebel Alliance. As with the first novel, Aftermath, Life Debt follows the exploits of Norra Wexley and her assortment of characters from every walk of life in Star Wars. While I enjoyed Aftermath, it certainly was a departure from the usual Star Wars lore, with legitimately gritty characters and a truly lived in, raw universe that bordered on nihilism. Life Debt does something wondrous, in that it takes those stakes and original characters and evolves them into a group you not only care about, but learn to love. In a well-established lore, Life Debt adds emotional depth and dimension to the Star Wars universe that is equal parts mature and deliciously entertaining.

A major reason for this is Wendig’s skill at developing character. Even the minor characters, such as former Imperial Sinjiir Rath Velus, bounty hunter Jas Emari, or Temmin “Snap” Wexley (coined by Wedge Antilles) evolve throughout the story in ways that don’t feel forced or artificial. Sometimes in novels of this scope, there are a few characters that fall flat; you find yourself almost dreading reading their sections in a novel. Fortunately, that is far from true here. Each page and character brings more intrigue and engagement for the reader. I voraciously turned each page, wanting to find out what would happen, and not just because it is a Star Wars book. It’s because it’s incredibly well done.

Chuck Wendig tackles diversity in bold new ways too. Sinjiir is one of the first gay characters in Star Wars, but it’s not a side-show or a stunt. He brings about true diversity and authenticity in a way that beautifully represents how the real world works, and pours it into Star Wars. I have never bought the argument that Star Wars features diversity because there are so many alien species. That’s not why; creators like Wendig are why. He understands the human condition, and punctuates Life Debt’s characters with depth and revelations that represent the very best in humanity. Life Debt is how it should be done.

While Life Debt features a fascinating assortment of characters in Wendig’s arsenal, perhaps none stand out more that Admiral Rae Sloane and Han Solo. The entire novel features an engrossing juxtaposition, as Sloane is clearly one of the “bad guys”, but you find yourself pulling for her. It’s not that I rooted for her to commit atrocities, but the machinations of a struggling power play amongst the surviving members of the Empire is not for the faint of heart, and seeing Sloane trying to navigate these murky waters is fascinating. This is Sloane’s fourth appearance in the new Star Wars canon (A New Dawn, Aftermath, the Kanan comic, and Life Debt), and is starting to stand out as less of an Imperial archetype and more as an individual.

The coolest part (and honestly, is there a better word to describe Han Solo?) is Wendig’s portrayal of Han Solo. The dedication at the beginning of the book features a reveal that Solo means something to Wendig, and Life Debt brings the goods. Arguably, Aftermath’s most memorable moment was the interlude in which Solo and Chewbacca boldly decided to liberate Kashyyyk, and one of the main plots of Life Debt is just that. It’s awesome, as is the voice of Han Solo in the more than capable hands of Chuck Wendig. In a clever piece of writing, Solo is one of the few characters in Life Debt that Wendig does not provide any internal monologue for. It makes Solo a bit mysterious to Norra Wexley’s band of misfits, and makes for fascinating reading. If Chuck Wendig gets to write more Han Solo, the Star Wars universe will be an even better place.

Life Debt is a great book that features some inspired action sequences, amazing characters, and a fresh look at an icon that is almost forty years old. It seems Del Rey is determined to craft some of the best Star Wars stories we’ve ever seen, and Life Debt is at the top of that list. If I was intrigued at the prospect of reading the second book in Chuck Wendig’s Aftermath trilogy, I am actually ravenous about reading Empire’s End, thanks to the engrossing adventure that is Life Debt.

Note: a big thank you to Del Rey for providing an advanced copy to review.