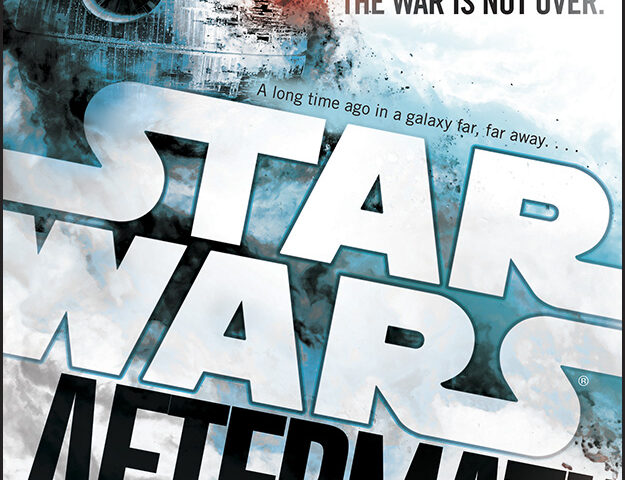 Aftermath is the long awaited novel from Chuck Wendig that boldly seeks to explore questions Star Wars fans have been clamoring for ever since Return of the Jedi hit theaters in 1983. Wendig has the incredibly arduous task of re-introducing fans to the Star Wars saga post ROTJ; a unique challenge, since it seeks to retread the time period famously explored by the beloved trilogy of books written by Timothy Zahn. Wendig is more than up to the task, as the book is a great read, albeit for reasons other than what you may initially expect.

Note: very minor spoilers below; nothing plot related, however.

As far as a plot synopsis goes, the description from Amazon.com states:

As the Empire reels from its critical defeats at the Battle of Endor, the Rebel Alliance—now a fledgling New Republic—presses its advantage by hunting down the enemy’s scattered forces before they can regroup and retaliate. But above the remote planet Akiva, an ominous show of the enemy’s strength is unfolding. Out on a lone reconnaissance mission, pilot Wedge Antilles watches Imperial Star Destroyers gather like birds of prey circling for a kill, but he’s taken captive before he can report back to the New Republic leaders.

Meanwhile, on the planet’s surface, former rebel fighter Norra Wexley has returned to her native world—war weary, ready to reunite with her estranged son, and eager to build a new life in some distant place. But when Norra intercepts Wedge Antilles’s urgent distress call, she realizes her time as a freedom fighter is not yet over. What she doesn’t know is just how close the enemy is—or how decisive and dangerous her new mission will be.

Clearly, this indicates that Aftermath is full of intense action; in fact, it’s much more violent in its verbiage than most Star Wars novels in recent memory (although Lockdown is more than comparable). The battle sequences are intense, frequent, and well described. Wendig seems to have been selected to pen this book based on his style, which is graphic and detailed; it’s not Game of Thrones violent, but there will be no doubt in your mind that war is brutal, divisive, and not for the feint of heart. It’s well done, and has a distinct style that is full of gravitas. Wendig is definitely a Star Wars fan with a particular vision unique to the genre.

Whatever preconceptions you have when picking up the book (and they are inescapable for Star Wars fans), be sure to cast out any hope that the heroes of the OT are prominently featured; they aren’t, and that took a bit of getting used to. However, once you find yourself invested in these new quintet, you will be happy you met them. Norra Wexley’s relationship with her son, Temmin is perhaps the most intriguing, and opens up real opportunities for dialogue about family and duty. Plus, she’s incredible; a fierce combatant, with leadership abilities and a strong sense of duty to match her maternal instincts.

We also meet a former Imperial Loyalty Officer (Sinjir Rath Velus) and a Zabrak bounty hunter (Jas Emari), who bring their own baggage, and have their own unique dynamic; however, the real prize here comes in the form of Mister Bones, a repurposed Battle Droid. No spoilers here, but this droid steals the show. The five are tough, gritty, and nontraditional. Quite honestly, they are a perfect metaphor for the novel and its style.

And it is a spectacle, to be sure. It’s not perfect, but it’s incredibly engrossing, albeit confusing at times. You may want to keep a notepad handy, to keep the many characters straight. To make it even more convoluted, there are a large number of interludes sprinkled throughout the book that feature stories sure to be told elsewhere. Some are stronger than others, but there is plenty to tantalize, and a number of easter eggs are present that will keep Star Wars fans on the lookout for when (and if) these tales will be told.

Aftermath features myriad moments that are ripe for discussion (It’s worth mentioning that Wendig writes a wonderful Han Solo/Chewbacca moment that will leave you breathless), and may leave the reader with varying degrees of satisfaction. This was not the novel I was expecting, but it is certainly the novel I had a hard time putting down. It’s a paradoxical novel that provides hope and optimism for what is to come, while also providing the reader with a dystopian sensation that is slightly unusual for Star Wars. It’s a unique, fascinating, unorthodox novel, and after reading it, I am more glad for the news that it is part one of a trilogy than initially thought. If you like to have your conventions challenged, Aftermath is the Star Wars novel for you.

Purchase your copy of Aftermath here

Note: A big thank you to Del Rey for providing a copy to review.