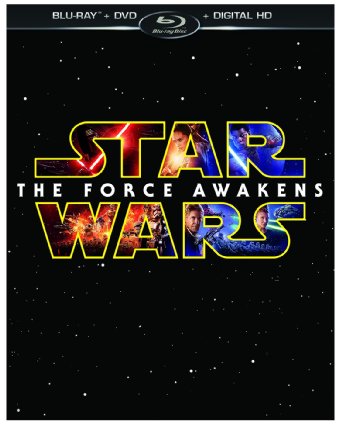 The Force Awakens finally arrives on Blu-ray and digital HD download this week, and is everything fans of this brilliant entry into the Star Wars universe could hope for. The film was easily one of the most anticipated films in recent memory, and with the promise of deleted scenes, a number of bonus features, and the film itself (the highest grossing domestic box office film of all time), there is much cause for rejoicing among the masses. The film delivered on just about every level, and the Blu-ray continues that cinematic tradition of quality we have come to expect from the Star Wars brand.

For audiophiles, the Blu-ray features English 7.1 DTS-HD Master Audio sound, an English descriptive audio track, French and Spanish language 5.1 Dolby Digital audio tracks, plus English, French, and Spanish subtitles. It’s every bit as amazing as you might expect, and is the new standard of home video entertainment for surround sound enthusiasts. You’ve never heard the Millennium Falcon reverberate through your home quite like this.

As far as the video quality, the disc provides 1080p high-definition widescreen, with a 2.40:1 aspect ratio, and it looks tremendous. It’s fair to say Star Wars has never looked or sounded better at home. I expect a crystal clear picture when I watch a Blu-ray, but after seeing the film in multiple, high-quality theaters, I didn’t think the experience could be topped. However, the Blu-ray accomplishes just that; it is Pixar level video clarity. In fact, I was even more enthralled with the splendor of the visuals of this film after experiencing it on Blu-ray.

The Film and Extras

It is reasonable to assume that anyone reading this review has seen the film multiple times, and can not wait to experience it at home. J.J. Abrams managed to manifest the most daunting of tasks in the entertainment field; he helped to create a new Star Wars film that is almost universally praised among critics, diehards, and casual film goers. It’s a fantastic film, and anyone who enjoyed it in theaters is sure to love it in the comfort of their own homes, as well as on mobile devices.

It is the extras, however, that create a new allure for fans of this blockbuster film. Each one is a testament to the care and passion put into this movie, and allows viewers to appreciate the film in all new ways. The following is a brief look at the extras provided:

Secrets of The Force Awakens: A Cinematic Journey

This behind the scenes look is worth the price of the Blu-ray alone; it’s a comprehensive look at the creation of the film from start to finish, and at 70 minutes long, will leave you hungry for more. It’s divided into four chapters, and features quite a few insights (especially if one was avoiding spoilers during the making of the film) into specific characters and plot points. It will, no doubt, greatly benefit from multiple viewings, as there is much for Star Wars fans to pour over.

It is also a fascinating window into the world of film-making. For instance, the section of the documentary that featured the Millennium Falcon being built is wondrous and awe-inspiring. A lot of passion, hard work, and painstaking detail went into the creation of Han Solo’s famous ship, and it shows here. Another highlight is towards the end of the documentary, which shows Harrison Ford’s first day of shooting, and the buzz that created for the crew and filmmakers. Even J.J. Abrams was enraptured with the return of Han Solo, and the documentary captures this moment in time beautifully.  Easily my favorite of the special features.

The Story Awakens: The Table Read

This four-minute feature shows the iconic table read of the script (made famous when the cast was announced), and is another nice window into Star Wars film-making. It allows for the viewer to be a part of something special; hopefully someday audiences will get to see even more of this meaningful experience. .

This nine minute short looks at the evolution from page to screen of the denizens of Maz Kanata’s castle. It’s interesting to check out, particularly if this was one of your favorite scenes in the film. Other than the original Star Wars, I’m not typically into creatures, but this is an entertaining feature, regardless of your proclivity towards these inhabitants of the Star Wars universe.

Ever since the “soccer ball” droid was revealed during the first trailer for The Force Awakens, audiences have been fascinated with BB-8. This six-minute extra peels back the curtain on the new droid, and shows even more why ILM deserved an Oscar for this new cinematic icon. It may demystify BB-8 for audiences, since it reveals how the droid came to life on camera, but it’s worth it, as the magic of movie-making is on display here.

Blueprint of a Battle: The Snow Fight

This seven minute feature shows the climactic battle between Kylo Ren, Rey, and Finn, and focuses on the building of the sound stage, the choreography of the fight, and the training necessary to make this important sequence believable. I love seeing the enthusiasm of the actors too; when you see it is much more than a job for these three, it makes you appreciate them and their characters that much more.

ILM: The Visual Magic of the Force

Is eight minutes enough to encapsulate the amazing things that ILM does for fans of the movies? Of course not, but this feature does whet the appetite, and is an amazing glimpse into how they make the impossible a reality.

Undoubtedly, much of what we appreciate about Star Wars is due to the incomparable John Williams. It is great to see this living master of music creating more iconic melodies for Star Wars.He is always insightful and interesting too, and shares some poignant reflections on his latest masterpiece.

With all of the amazing work done through the Force For Change movement, I was expecting more than a three-minute feature. Perhaps all of the videos released to promote the movement would have been a nice way to cap things off, but that is not really featured here. Still, it’s nice to have at least something for this, as it is such an important cause.

Deleted scenes are typically deleted for a reason, but there are a few nuggets here. The X-wing scene with Poe was cool, and would have been nice to include in the film, and Rey’s reaction back on the Resistance base to Finn’s injury was touching too. The Kylo Ren exploration of the Millennium Falcon, however, was extremely cool. I am glad that it was not included in the final cut, as the emotional beats here are already covered well in The Force Awakens.

I will say, however, that there is something invasive about seeing Kylo Ren in the Falcon. It is creepy and sinister, which makes this brief clip rather poignant. Ultimately though, keeping it a deleted scene makes it feel more nightmarish in tone, which serves it well in this particular medium. The rest of the deleted scenes are fun, but forgettable (I’m particularly glad that the snowspeeder chase was left out of the film), due to the pacing issues they may have caused. If anything, the deleted scenes show how the editing of The Force Awakens was expertly crafted.

Star Wars: The Force Awakens is a blockbuster film on every level, and the Blu-ray continues the excellence as well. It’s an absolute must purchase, and brings audiences even further into the splendor of this incredible mythology.  Star Wars: The Force Awakens is available for purchase on Tuesday, April 5th, and is available for digital download today.