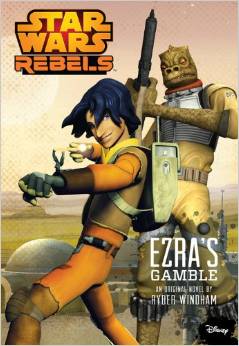 The Junior novelization of Ezra’s Gamble by Ryder Windham is the latest Young Adult book that takes place in the Star Wars universe, and focusses on Ezra Bridger, one of the new stars of Star Wars: Rebels. In the 160 page book, Ezra is placed into an unlikely partnership with the bounty hunter Bossk, best known for his appearance in The Empire Strikes Back, as they seek to survive against a horde of Stromtroopers, while ostentatiously clearing Bossk’s name. Duplicity abounds as the tandem encounters multiple adventures along the way to achieving their different, yet congruent goals, survival and financial gain.

This book does something I never expected: it makes Bossk an actual, three-dimensional character. This is a surprise, and not because the book and characters were better than I expected. Windham portrays Bossk as a layered character that lends himself to further examination. Whether this decision by Windham and the Lucasfilm Story Group is part of a larger vision for the popular character, or whether it is to put a cool, well-known character on the cover is yet to be determined. My hope is that it is the former, as Bossk is compelling. Yes, he is driven by avarice, but he also attempts to foster (albeit loosely) a relationship with the eponymous hero of the book. This is a refreshing twist in a YA novel that could have easily taken the “faster, more intense” approach that can get tiresome without character and motivation.

This book (along with the pilot episode of Rebels) help to quench any doubts fans have about Ezra; he is not the annoying teen that many have feared. He is nuanced, he is talented, ad he is compelling. Plus, he has charisma. He brings out unique traits in others, and his skills as a pickpocket, as well as his ability to charm others brings a new type of hero into the Star Wars universe. In essence, Windham introduces Ezra as a character that you want to spend more time with, and this really comes into play when he interacts with Bossk. Without giving too much away,when the two are together, their partnership helps to drive the story, much more than any other plot devise.

Ezra’s Gamble takes place before the premier of the series, and helps introduce the world to the force-sensitive fourteen year-old through a number of adventures that occur through the underbelly of Lothal, and it is a fun, engaging story that offers a bit more than one might originally believe. It starts out relatively slow, but once Bossk shows up, and we see the dynamics at play, the fun takes off. The YA novel is for the 3rd-7th grade level, but is enjoyable for all readers. Perhaps the main gamble is to see if this YA book will be enjoyed by adults, but I think you will find that to be a safe bet.