And now the end is here; The last letters of the alphabet have appeared; My friends, I’ll say it clear; For me this has been quite the year; I’ve had such fun; I hope you have, too; Oh what a run; From A to Z we made it through…

Quite the undertaking I set in store for myself when 2015 dawned. I thought it would be a grand walk through the alphabet getting to know a few of the lesser-known Star Wars characters as I picked my way through the ABCs of Star Wars, highlighting at least one character for each letter. Paging through the Star Wars Encyclopedia [my main source of research], I found a plethora of characters from which to choose to represent one letter or another. Then, there were times when I’d be lucky to find one character to highlight a particular letter. The only letter that had me stumped was “X”. I could not find a single [non-droid] character to highlight that letter of the alphabet. Our distinguished co-leader, Dan, suggested I feature ‘x-wing pilot’ – as so many are dubbed in the credits of “A New Hope” – but I just could not go in that direction. Not to slight any of those individuals who played a vital role in helping the Rebels defeat the Empire, I really wanted to find a character who had a name … which would lead to a backstory. [Admittedly, ‘nameless’ characters, too, have a backstory.] With all the creative names used to identify characters in the Star Wars Galaxy, could there not be one whose name began with “X”? [There are a fair number in the Expanded Universe. However, at the onset of this quest, I set up only two criteria: the character could not be a droid and s/he had to appear in one of the six films.]

Recently, when I sat down to determine who I would highlight for this blog’s entry, I decided to page through the encyclopedia’s listing for “X” one last time. As unlikely as I thought it would be, I just might have missed the one film character whose name began with that letter of the alphabet. Give it one more go, I thought. You know what? As luck – or the Force – would have it, I came across one – yes, one – honest-to-goodness character that I could tuck into the “X” spot! Read on to find out who that character is – as well as my choices for “W”, “Y” and “Z”. However, before I get into the meat of today’s post, please allow me to express my gratitude to you for going on this journey with me. It has been a wonderful adventure, and I’m glad I had you with whom to share it. 🙂

W … As the Empire continued to tighten its mighty grip on star systems across the galaxy, it didn’t take much for many of the best and finest to join forces with the Rebel Alliance. Commander Vanden Willard was one such individual. He had been a close friend and confidant of Bail Organa’s, and eventually became the Alderaanian leader’s personal assistant. Not only was Willard closely connected to the Organa family, he was a spy for the growing Rebellion. Commander Willard was not on Alderaan when Princess Leia watched her home world be destroyed at the behest of Grand Moff Tarkin. Rather, the military leader was on Yavin IV, and it was he we see greet Leia when she emerges from the Millennium Falcon. Willard offers his condolences, but the always practical Leia indicates time is of the essence, that the technicians must work quickly to recover the plans for the first Death Star from R2D2’s memory banks – and hopefully find a flaw in its design. Darth Vader and Tarkin are sure to drop into the star system in short order. Luckily, everything turns out well [for the Rebels], and Willard is able to continue his work with the Rebellion. Once the Rebels serve up their decisive victory at the Battle of Endor, Commander Willard serves as one of the New Republic’s top military advisors. With General Jan Dodonna, Pashha Starkiller, Adar Tallon and other key veterans of the Galactic Civil War, the trusted advisors give birth to the Gray Cadre.

X … Here we go! My one find for the letter “X”! How in the world did I miss Selif Xam when I was doing my initial research? Xam, a doctor and surgeon for an archaeological team investigating the ancient ruins among the Polis Massa asteroids during the Clone Wars, was the physician who delivered Luke and Leia. [Little did he know the vital role he was playing to help in the ultimate demise of the oppressive Empire!] The birthing process of humans was virgin territory for the Polis Massan physician, but that did not stop Xam from helping his friends. Xam simply programmed his droids to assist him, and, while he could not will Padmé to live, Xam’s success in making sure the twins were delivered successfully gave hope to the Star Wars Galaxy.

Y … We may not know what species Yaddle is, but there is quite a bit of information 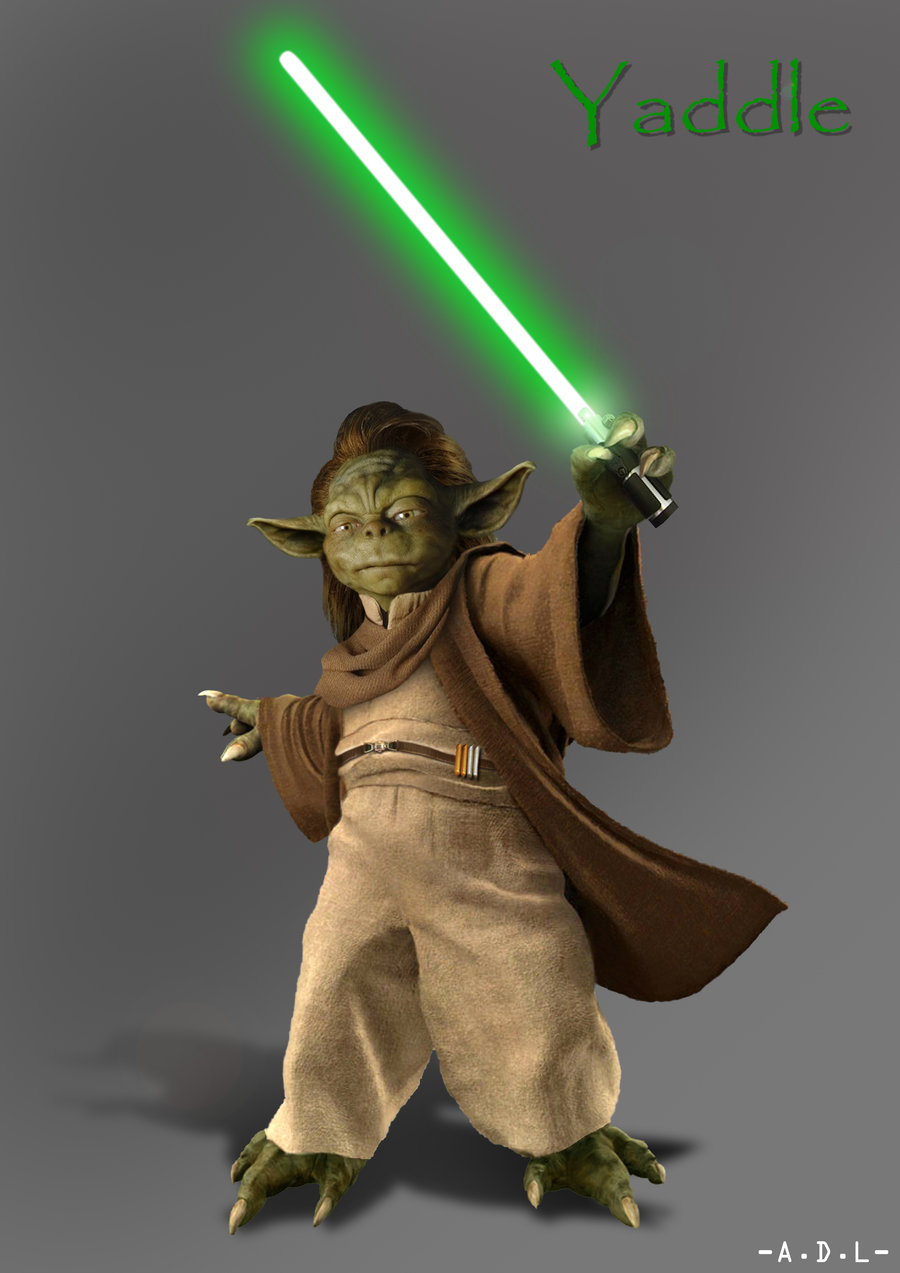 known about the diminutive Jedi Master. Known for her patience, compassion and wisdom, she relished working with the Jedi younglings and young padawans. The youngsters were known to play harmless pranks on their learned elder, but instead of reprimanding them, Yaddle preferred to leave sweet surprises in her charges’ pockets. That way she let them know she was well aware of their antics, and chose to be forgiving. [Although maybe Yaddle’s ‘reactions’ to the pranks were exactly what kept the younglings and padawans carrying out their shenanigans. 😉 ] Two hundred years before the Battle of Naboo, Yaddle was apprenticed to Jedi Master Polvin Kut. Master and Padawan were tasked with a mission to the planet Koba to deal with Tulak, an Advozse warlord terrorizing the planet’s citizens. As the Jedi carried out their mission, Kut was killed, and Yaddle was imprisoned. Her patience certainly came in handy since she was a captive for decades! She gained her freedom when Koba experienced an onslaught of seismic activity, ultimately splitting the planet’s crust. When Yaddle finally made it back to Coruscant, she was elevated to Jedi Master and was appointed to the Council. In a short matter of time, Yaddle became one the few Jedi Masters to learn and master Morichro – used to slow the body’s functions. Seven years after the Battle of Naboo, Yaddle teamed with Obi-Wan and Anakin on a mission to Mawan to help set up a new government. During the course of executing their mission, Yaddle learned the planet’s most notorious crime lord, Granta Omega, planned to detonate a toxic explosive. Moments prior to the explosion, Yaddle selflessly cocooned herself and the bomb in the Force, saving the city of Naatan and its inhabitants. Sadly, Yaddle herself could not survive the deadly toxins. No, we don’t know what species Yaddle was, but it’s safe to say she was a shining example of what it means to be a Jedi. 🙂

Z … Easily identifiable by his long gray beard and topknot, Senator Fang Zar served his home world of Sern Prime with distinction. The outspoken Zar, a close friend of Corellian Senator Garm Bel Iblis, was one of the original signers of the Delegation of the Two Thousand. Their efforts may have done little to curb Chancellor Palpatine’s growing powers, but their efforts sowed the seeds of rebellion once Palpatine formed the Galactic Empire at the close of the Clone Wars. It wasn’t long after Palpatine set up Imperial rule that Senator Zar was arrested for sedition. Eventually, he was released. Upon gaining his freedom, Zar headed for the home world of one of his closest friends – Bail Organa – to seek early refuge there. After a fashion, Zar decided it was time to return to his own home world. En route for Sern Prime, the Drunk Dancer [what a name for a ship! 😉 ] was intercepted by Darth Vader, who boarded the transport in search of Zar. The Dark Lord succeeded in his mission to rid the galaxy of the outspoken former senator, but was not able to quell the momentum Zar and his compatriots put in motion prior to the rise of the Galactic Empire. As far as Sern Prime’s former senator was concerned, it was important to be a voice for those who could not speak for themselves – whether out of fear, ignorance or inability. His was a voice that was heard long after his death.

Well, there you have it, my friends. I suppose I should say I have conducted this waltz through the ABCs of Star Wars My Way. 😉 I chose the characters who I thought would be interesting to feature. I hope you haven’t been disappointed with my choices. I certainly learned a great deal about many beings who have given so much depth to Star Wars [and ultimately to our enjoyment of the Saga]. I’ll see you on Feb. 15. 🙂 Until then…

[The 2008, three-volume “The Complete Star Wars Encyclopedia”, IMDb.com, my countless viewings of the first six Star Wars films and watching “The Force Awakens” a handful of times – so far – has aided in my research.]