To say I’ve been walking around feeling like a giddy schoolgirl is … well, an understatement. 🙂 With just a tad bit more than 100 days to go [see this blog’s end for the exact number] until “Star Wars: The Force Awakens” debuts in theaters around the country, that is exactly how I feel! 🙂 And why not? All of us were under the impression that “Revenge of the Sith” would be the last feature film to be released that centered on the galaxy far, far away. It wasn’t all that long ago that we learned that wasn’t to be the case, and now we have something tangible to which to look forward! 🙂 New characters. New environments. New multi-layered stories. I can’t wait!

However [I don’t mean to be a wet blanket, but yes, there is a ‘however’ 😉 ], as I like to say: You really can’t know where you’re going without first knowing where you have been. That’s why I decided to tackle the ABCs of Star Wars series this year – to give us all a chance to get reacquainted [acquainted, in many cases] with some of the lesser known characters who came before this new cadre we will meet in just shy of four month’s time. For me, it has been a wonderful trip down Memory Lane, and in its own special way, has helped me develop a deeper appreciation for what George Lucas created. We have a lot of ground to cover this month, so let’s get right down to it, shall we? 🙂

J … I suppose one can say I have ‘a thing’ for flyboys and flygals. I try not to let my penchant for them surface too often when choosing who to feature during my parade through the alphabet, but this month, I decided to throw caution to wind, and give in to my penchant every time I could. Wes Janson hits the nail on the head – he’s dashing, a superb pilot, loyal to the Rebellion and the New Republic, and he’s got a sense of humor [sometimes in a dark way; more on that in a moment 😉 ] to boot – which comes in handy to relieve the tension warriors often face.

Wes Janson is a native of Taanab, a peaceful planet whose inhabitants are, for the most part, devoted to a life of farming. As Wes grew up, it became apparent that farming was not the direction he wanted to take his life. Instead, much like another farmboy, Wes set his sights on flying starfighters across the galaxy. Luckily for the Rebellion, Wes threw his lot in with the fledgling group, joining the rebels at their starfighter outpost at Tierfon. He quickly rose through the ranks, and gained True Gunner status as an X-wing pilot in the Yellow Aces, a faction of flyers who were an integral component of Red Squadron, especially at the Battle of Yavin. Shortly before the noted battle that resulted in the destruction of the first Death Star, Wes came down with a terrible case of Hesker Fever, and could not take part in the epic air battle. Instead, his friend Jek Porkins filled Wes’ spot, and Porkins’ death preyed on Wes’ conscience for years.

After the Battle of Yavin, Wes Janson became a member of Rogue Squadron. He served under Luke Skywalker, now a commander, at the Battle of Hoth. As compatriot Wedge Antilles’ gunner, Wes’ call sign was Rogue Five. Remember when Wedge’s and Wes’ snowspeeder crashed on Hoth? The duo had to wait a l-o-n-g time for rescue, and survived Hoth’s bitter environment by hunkering down in the gutted hull of a downed pirate freighter they came across. The pair’s survival and rescue became legendary – so legendary that it didn’t take Wedge, who also had a somewhat warped sense of humor, to join Wes in pulling a prank on new recruits. During their initial classroom lessons, Wedge regaled the recruits with the tale of what happened to the duo on Hoth, and informed the new pilots that Wes didn’t make it. Who should walk into the classroom at that point but none other than Wes! The look on the recruits’ faces was priceless, so they say. 😉 Like I said – they were a bit warped. 😉

Wes’ supposed demise on Hoth was not the only time the famed farmboy-turned-Rebel pilot was thought dead. Years later, when the Rogues were ambushed on Distra [searching for evidence of Pulsar Station – a Death Star-like station thought to be under construction, but in reality, those reports turned out to be false] – it was thought that Wes had perished during the mission. Luckily, he was rescued by Booster Terrik and his Errant Venture. The pilot retired – twice – and returned to active duty – twice – once during the Yuuzhan Vong invasion, and again when Wedge asked Wes to lead the mission to destroy Centerpoint Station – a space station that did indeed have the capacity to destroy a planet. Always loyal, Wes Janson never could turn down his friends.

K … Are you ready to be introduced to another pilot? 😉 Derek “Hobbie” Klivian gets the honors to represent the letter “K”. 🙂 Unlike Janson, who joined the Rebellion outright, Hobbie was part of Biggs Darklighter’s contingent who got his pilot training thanks to the Empire, and eventually, with Biggs, jumped ship to defect to the Rebel Alliance [shortly before the destruction of Alderaan]. Hobbie did not take part in the Battle of Yavin, but most definitely was present for the Battle of Hoth. He served with Rogue Squadron [his call sign was Rogue Four], and remained with the famed squadron at the Battle of Endor, and later at the Battle of Bakura.

After Endor, Hobbie earned a new nickname – “Bugbite” [What? “Hobbie” wasn’t enough? 😉 ] – an honor bestowed upon him by Intelligence Officer Iella Wessiri. The future Mrs. Wedge Antilles [for those of us who enjoy the EU 🙂 ] gave Hobbie the additional moniker as a reminder of their first meeting, on Corellia. Hobbie was bitten by a local insect, a not-very-pleasant experience for him. Sometimes it’s nice to share a little “inside joke” with someone, isn’t it? 😉 Years later, with peace between the New Republic and Imperial Remnant on the horizon, Hobbie retired from active duty.

L … I bet you think I’m going to talk about another pilot. 😉 I’m not, in this case. When perusing the characters from which to choose, my eyes settled on Beru Whitesun Lars, and I knew I had found the individual to highlight. A native of Mos Eisley, Beru had no intention to ever leave Tatooine. And while the hot, desert sun and harsh, arid environment may have taken its toll on Beru’s physical beauty over the years, it certainly did not squelch her inner beauty. She had a deep love for her husband, Ow 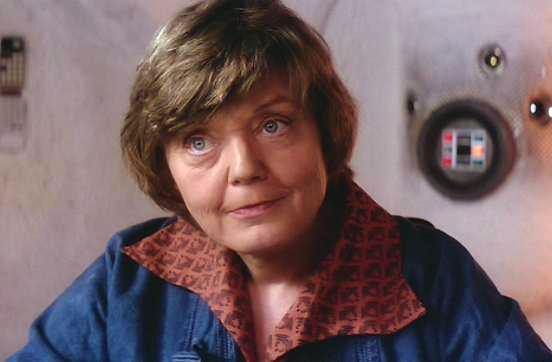 en, and nephew, Luke, and she thrived in her own little corner of the planet. She thoroughly loved working side-by-side with Owen, and was instrumental in making sure Luke grew up with the values of hard work, loyalty, commitment and compassion – all attributes that would serve Luke well when he eventually pursued the life of a valued member of the Rebel Alliance and that of a Jedi. Beru and Owen made it their mission in life to make sure Luke had as normal an upbringing as possible, even going as far as to skirt the issue about who Luke’s father really was. Yoda and Obi-Wan Kenobi made a wise decision to hand baby Luke over to the couple. Yes, Obi-Wan could keep an eye on the growing boy, but it really was the Larses who were responsible for his well-being, and making sure Luke grew into the man he was to become.

Beru’s wisdom and acceptance of what could not be changed were the guiding force in the Lars/Skywalker household, and that never came through as clearly as it did the afternoon when she once again tempered her husband’s desire to hold Luke back from [unbeknownst to Luke] following in his father’s footsteps. “He’s just not a farmer, Owen,” she pointed out to her husband when he attempted to tether the angst-filled Luke to the moisture farm for yet another season. “He’s got too much of his father in him.” Beru saw the wisdom in letting Luke go – that sometimes that is the best course of action. Sadly, neither Beru nor Owen ever got to see all that Luke was able to accomplish with his life. Luke’s guardians were slain in a most brutal fashion when the stormtroopers, searching for R2D2, incinerated the Lars Homestead [and everything and everyone in residence]. I can well imagine Beru giving the stormtroopers an earful right up to the end. Known as a “spitfire” who often held her own in verbal sparring matches with Owen’s father, Cliegg Lars, Beru had ample practice to shower the Imperial agents with her opinion of what she thought of them. At least that’s the way I like to think of Beru. 🙂 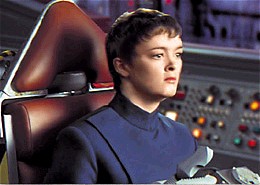 M … We’re half way through the alphabet with the letter “M”, and how could I not wrap up this month’s blog with yet another pilot? 😉 On screen for but a few moments, not too much is known about Maoi Madakor. What I can tell you is that she was the captain of the Radiant VII, and was tasked with ferrying Jedi Master Qui-Gon Jinn and his padawan, Obi-Wan Kenobi, to the Trade Federation ship Saak’ak to work out a peaceful end to the Federation’s blockade of Naboo. While the Jedi were waiting for the Neimoidians to arrive, Maoi and her co-pilot, relaxing in the cockpit, noticed all too late that the Neimoidians were not to be trusted. Under directions from Darth Sidious, the Radiant VII was targeted for immediate destruction, and all aboard the ship were lost. Neither Darth Sidious nor the Neimoidians had any intention of brokering a deal, and this was but the first in a series of treacherous events that were to befall the Republic and its citizens.

That’s a wrap! 🙂 I hope you’ve enjoyed this month’s adventure through the alphabet. It has been my pleasure to share some of these unsung heroes and heroines with you. I invite you to leave a comment below. Please scroll through the ads, and leave a note in one of the slots at the bottom. I’d love to hear what you have to say about this month’s fare. Or, of course, please feel free to drop me an email at melindaw@coffeewithkenobi.com. 🙂

[The 2008, three-volume “The Complete Star Wars Encyclopedia” and IMDb.com, as well as my countless viewings of all six films aided in my research.]

One hundred nine days and counting …

Until next time, MTFBWY 🙂