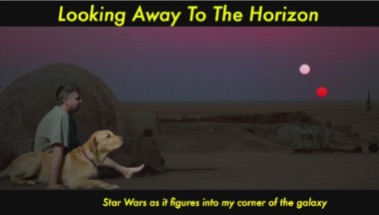 Vintage Star Wars Figures: How I Rediscovered My Old Toys

My blog, Looking Away to the Horizon, tends to focus more on the personal side of Star Wars. The majority of my articles deal with my Star Wars Room, what a certain part of the movies mean to me, and how Star Wars has become a positive influence in my family. Basically what Star Wars means to me as an adult fan. Oddly enough, my two previous guest posts for Coffee With Kenobi were more historical examinations of vintage items that helped to explain where George Lucas was coming from when he set out to create our favourite saga. In the spirit of my own blog, I would like to explore something much more personal to me, namely, why it took me nearly twenty years to find a place in my fandom for vintage Star Wars toys.

Also, I’m getting a little tired of non-news and rumours clogging up my Twitter feed. What do I do when it feels like being a Star Wars fan is becoming work? I talk about toys.

When Kenner released the Power of the Force 2 action figure line in 1995 I was about fours years back into being a Star Wars fan after being away from it after Empire Strikes Back. (What can I say? I was 14 and had moved on to punk rock, girls and Maple Leafs hockey.) I remember buying a copy of Topps’ Star Wars Galaxy Magazine and seeing a photo of that first wave of modern figures. Although they appeared to have been fed steroids, I was excited to be able to buy new Star Wars toys for the first time since I was a kid. And at the age of 28 I didn’t even blink at beefed up versions of Luke and Han, I figured this is what kids must like these days.

The He-Man styled figures soon gave way to more realistic looking characters and by that time I was hooked. I was buying figures of characters that I had never owned before. I became an Adult Star Wars Toy Collector.

However, as my modern collection began to grow, I got ahold of the vintage figures that my brother Doug had wisely kept safe from the Big 80’s Garage Sale that saw most of our other Star Wars merchandise being sold. I was feeling nostalgic. Then I quickly decided that the old Kenner line wasn’t worthy to share shelf space with my new figures.

Our old figures are comprised of the first Original 21 figures that Doug and I shared and another batch of ESB toys that are his. But I couldn’t see past the simplistic nature of these old toys. Why would anyone want a Greedo in a lime leotard when he now comes much more screen accurate? Walrus Man? Nuh-uh, he’s Ponda Baba, sir. And the lame way Luke’s yellow lightsaber (shudder) was stored up his arm? Ridiculous! As quickly as I took possession of these I gave them back to my brother. “Do what you want with them,” I said. “I’m a Modern Collector!”

I seesawed about this for years. I even took them back again and displayed them in my Star Wars Room only to give them to my son who also ended up preferring the modern versions of these toys. Actually he preferred the Prequel era toys overall. He’s sixteen and has also moved on from Star Wars toys (and Star Wars in general), but that’s a story for another blog post.

For years my logic for preferring modern to vintage was based on the 2009 Legacy Collection ‘Wedge Antilles’ X-Wing Starfighter.’ Who could ever claim that the smaller scaled Kenner version of the X-Wing was superior in any way? In 2009 I got an X-Wing that looked, as far as I was concerned, like a movie prop. It was awesome! I’ve since added Luke’s and Biggs’ ships as well and will find myself holding these modern representations up to my face, staring down the fuselage as I did with my Kenner X-Wing when I was 10 years old and thinking “this is so much better.”

With these opinions, why am I writing an article extolling the Kenner Vintage line? Well, the internet, and specifically social media, played a huge role in my change of heart. Sometime in 2011, I discovered Tom Berges’ I Grew Up Star Wars website and Facebook group. As the name implies it’s a website with a decidedly (but not exclusively) Vintage focus. This group especially got me to rethink my position on Vintage as member after member posted photos and shared memories of the toys of their pasts.

I began digging back into my experiences as a young Star Wars fan. I took my old figures back out of their box again. I started asking about pieces in my collection, like a 12 inch Darth Vader given to me in the late 90’s by a friend that I thought was a knock off of sorts but was actually from the Kenner line. I discovered that my brother still had the old Sears Cantina Playset, some die-cast vehicles and his Darth Vader carry case. I went over to his house and scooped up everything that was old. As more and more memories of being a young Star Wars fan began to surface, I also started getting an idea that maybe I should start writing some of them down. Doug and I began exchanging emails where I would ask specifics about our shared collection, when we saw Star Wars the first time, where did we buy such and such figure. It was amazing to discover how he retained so many details that I’d long forgotten.

Between conversations with my brother, discussions on social media, and listening to Star Wars podcasters recalling the same memories I was having, two things occurred. I launched the early version of my blog and, more importantly for this article, put my Vintage figures in a place of prominence in my Star Wars Room.

But was this fueled only by my childhood memories? Check back later as I wrap up my personal vintage figures saga.