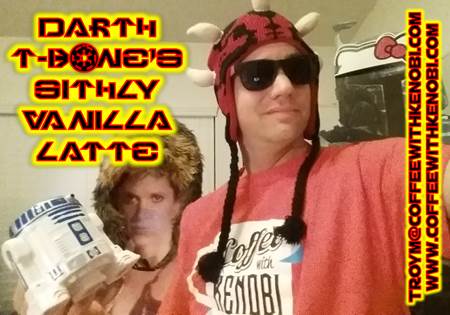 Oh the Holidays are upon us once again, bringing joy and togetherness to all of us at one with the Force. It is a time for family, friends, parties, and presents. Of course, there is always that debate on whether it is better to give than receive. I for one, vote for receive. As Star Wars Fans we have been given so many gifts over the past 37 years from our beloved Galaxy (37, really?). I love Star Wars presents! Think about how much Star Wars really means to you and what we as fans have been given.

Just a few days ago for a HAPPY THANKSGIVING – we got our “The Force Awakens” trailer that blew up the internet the right way and has close to 40 million views in just a few days. This blog, I’m not going to go into a full review on how awesome I feel that trailer is. Fine, three things – New Troopers, Cross Guard Lightsaber, and the Falcon baby! I am very excited. Just a few days ago, I wrapped up the DVR’d last episode of the mid-season of Rebels – which was another great gift for 2014. I am so in love with that show. As a big McQuarrie fan, I am just amazed at all of the inspiration and the respect being paid to RMcQ and his designing of our precious Galaxy. Again, I’m not going to go on a full review of Rebels’ awesomeness this blog. Fine, three things for mid-season – Inquisitor’s lightsaber, Ezra’s mind control over that big gnarly beast, and the fact it’s new Star Wars and I like it! For the record, I like all Star Wars.

Now we can take it back, back to a simpler time. Summer 1977, the world changed. I think we know what happened then, right? I’m not going into that. Fine, three things – Landspeeder, TIE Fighter screams, and Obi-Wan/Vader duel! How about the night of November 17, 1978 (my dad’s birthday)? Now that was special. You might say it was a “Holiday Special”.

Oh, this was a gift to me. Many people hate it, and they can if that’s what they want to do. I could easily name more than three things I love about the Holiday Special. Fine, one thing – BOBA FETT!!! The HS introduced us to everyone’s favorite Bounty Hunter. You can’t argue with that.

I could go on and on about the gifts we as Star Wars Fans have received over the years. Aside from the movies, the cartoons, the caravans full of courage, the toys (um, I mean collectibles), Rose Parade floats (which Brandy and I worked on!), conventions, and everything in between – we have been given a connection and a family. Earlier I mentioned that I love to receive presents. That is what this blog is about really. The cool stuff I have been given over the years and the special people that give it to me.

Everyone I work with knows that I am a Star Wars fan. Heck, during Safety Training I show them Comic Con pictures and regale them with tales of my Geekdom. I encourage that fact that I will give any and all Star Wars a good home in my collection. It is not at all uncommon that I will get to my desk in the morning and there will be a Star Wars gift of some sort, left anonymously. No it’s not a secret admirer. It is several people that when out on their adventures see something Star Wars and think of me. That means the world to me. I have been given everything from books, video games, posters, toys, food boxes, ROTS Darth Vader DVD Display, R2-D2 earbuds, and Tatooine Hot Sauce (those two were recently). The next part of this is insane. My dear friend Lola ran across an Empire Strikes Back action figure carrying case, full of figures, in her house. I told her that I could take a look at them and let her know what it was worth if she was interested in selling them. It was the day before my birthday when she brought them into work. The ESB case, the figures, oh my face lit up. She dropped them off then came back later. She had spoken with her daughter who told her to just give them to me for my birthday. Lola thought that was a great idea. So she did! I told myself I would not get into collecting vintage figures. Well, needless to say I was given an instant collection that day. That same year another friend sold me (a gift nonetheless) a box of vintage figures for $27 – it was all I had. They were pretty hammered, but again all Star Wars gets a home. For a guy that didn’t collect vintage figures, I sure have a lot of vintage figures. Thank you to all of my friends that have been so generous.

OK, so I’ve been part of giving too. When CWK’s own Dan Z. got married, I along with some of his secondary Geek family all chipped in and got them the 2012 San Diego Comic Con Exclusive Hasbro “Lost Packaging” set with Exclusive Jar Jar in Carbonite. Brandy hated that Jar Jar figure. What can I say? She loves him. We’ve seen the actual Jar Jar in Carbonite that was presented to George Lucas by the 501st. Oh, the tour of the Presidio, Big Rock Ranch, and Skywalker Ranch thanks to my cousin. I can’t get into that for sure, maybe for another blog though??? Fine, three things – Charlie Chaplin’s cane, the Tomato/Kale soup from the Big Rock Ranch Cafeteria, and taking a lot of toilet paper as a souvenir from Skywalker Ranch!

***Gifts from my cousin, former Lucasfilm employee, that adorned her desk ***

***I know you wanted to see it – Skywalker Ranch toilet paper (yes, it’s laminated and I got it from the ladies room)***

Now I couldn’t close without a mention to one of the most generous gift givers in the Galaxy. When I first met her, it was a decade ago (again, really?) on the old Star Wars blogs and message boards. That is where the majority of us here at Coffee with Kenobi met. I met her in person at Celebration IV. She gave us a Dagoba bar while we waited in line for the One Man Star Wars show. She is a special Jedi that has this talent for writing so eloquent, so thought-provoking, and so passionate. She would hold these drawings for absolute prizes of coolness. No cost to anyone, just her generosity. She has raised money for friends, but never once harassed anyone for it. She just wanted to offer you the chance to be as awesome as she is. One time we all chipped in and got her a Luke statue that she had always admired at her local shop. The store was closing, if I recall correctly. We arranged with the owner payment and delivery. I know that meant a lot to her. Many of us can attest to getting a package, out of the blue, and inside would be a Star Wars care package, a wonderful HANDWRITTEN letter, and an overwhelming sense of her amazingness. She still does all of this to this day. I call her Saint Melinda. From all of us, Thank you.

Is there any better gift than friends?

So my friends, I wish you all a Safe and Happy Holiday Season and New Year and of course – May the Force Be With You…Always