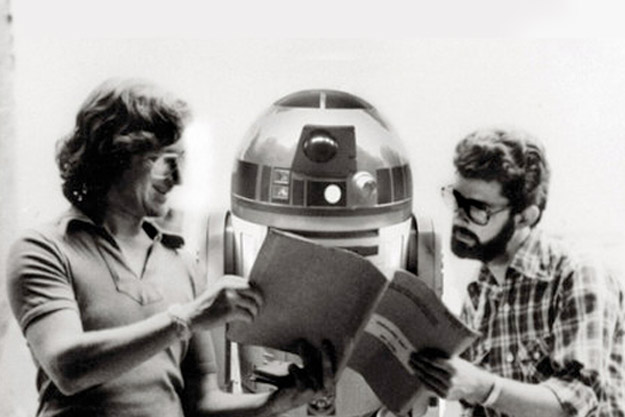 It is a well-known fact that Steven Spielberg is a huge Star Wars fan. In fact Spielberg has been a fan right from the beginning. Before the beginning in fact. When Lucas showed an early cut of Star Wars to a test audience which included several directors it was only Spielberg who loved it and could see pass the incomplete special effects at the time.

Spielberg could see huge potential in Star Wars and his friendship with the director, George Lucas proved to be an asset to Star Wars in general. The Jaws director often slipped in Star Wars references into his movies and even assisted George in the creation process of Star Wars.

We have to thank Spielberg for the Star Wars soundtrack composed by John Williams we all love and enjoy. It was Spielberg who recommended John Williams to George Lucas after working with him on the shark chasing movie, Jaws. For that alone Star Wars fans including myself are eternally grateful.

While making Revenge of the Sith, George Lucas asked Steven to “play” with the Mustafar duel and also the Yoda duel during the animatic stage. No one knows for sure how much input Spielberg actually had on these scenes but his name is credited in the end credits as Assistant Director so it must have been quite a bit.

R2D2 hitches a ride on the mother ship in Close Encounters

Star Wars obviously had an instant impression with Spielberg because as early as Close Encounters which was released in 1977, the same year as Star Wars there is a reference to the galaxy created by Lucas. Towards the end of Close Encounters when the mother ship gracefully passes over Devil’s Tower look closely you will see R2D2 upside down, affixed to the underside of the ship.

In fact it would seem Spielberg had more faith in Star Wars than its creator did and it’s because of that faith Spielberg still makes money on Star Wars to this day. Lucas was so sure Star Wars would be a flop, he offered Spielberg a percentage of the takings from his sci-fi epic, in exchange for the same percentage from Close Encounters of the Third Kind.

“George came back from Star Wars a nervous wreck. He didn’t feel Star Wars came up to the vision he initially had. He felt he had just made this little kids’ movie. He came to Mobile, Alabama, where I was shooting Close Encounters on this humongous set and hung out with me for a couple of days. He said, ‘Oh my God, your movie is going to be so much more successful than Star Wars. This is gonna be the biggest hit of all time, you want to trade some points? I’ll give you two and a half per cent of Star Wars, if you give me two and a half per cent of Close Encounters. I said sure, I’ll gamble with that, great. And I think I came out on top of that bet. Close Encounters made so much money, it rescued Columbia from bankruptcy. It was the most money I had ever made, but it was a meagre success story. Star Wars was a phenomenon and I was the happy beneficiary of a couple of points from that movie which I am still seeing money on today”.

Club Obi-Wan in Temple of Doom

Star Wars references would continue to sneak into Spielberg’s movies and of course when you combine the creator of Star Wars and one of its earliest fans, Spielberg, you are of course going to get a few references to the Star Wars universe creeping into the Indiana Jones movies. For example in the first Indiana Jones movie, Raiders of the Lost Arkcheck out the hieroglyphics on the walls in the Well of Souls. There is a depiction of R2 and 3PO there. Also the letters on Jock’s plane sporting a hidden snake in the passenger seat is OB-CPO. In the beginning of Temple of Doom in which Willie Scott sings, the club is called Club Obi-Wan, which was named after Obi-Wan Kenobi.

1982 saw the release of E.T. The Extra Terrestrial, directed by Steven Spielberg. Of course everyone loved the movie. Everyone remembers the Halloween scene where E.T. is disguised as a ghost and encounters a child dressed up as Yoda. George Lucas would repay the compliment years later in The Phantom Menace. During the senate council chamber scene, one of the pods contains three E.T’s. For the record the E.T’s are called Grebleips in the Star Wars universe which of course is Spielberg backwards.

There is also the sublime scene in E.T. where Elliot shows his alien friend his toys. “This is Lando and this is Greedo” Elliot would explain as he shows off his Kenner figures to E.T. In fact Elliot’s room is plastered with all things Star Wars. The same can also be said for Robbie in Poltergeist of which Spielberg had a major helping hand in creating along with Tobe Hooper. It really is a collector’s heaven. At one point Robbie feels the need to cover the evil looking clown sitting on the chair staring at him with his coat. To his dismay the coat reveals Chewbacca staring back at him. I know which one I would prefer.

The movies the two directors have made over the years have led to some of the biggest movies in cinema history and the two have acknowledged each other’s achievements. When Star Wars beat Jaws’ box office gross, Spielberg took out a full page advert in Variety showing R2D2 on the back of a boat with a fishing pole, reeling in a very big shark. Lucas returned the compliment years later when E.T. came out and overtook Star
Wars records in 1982. His advert showed R2D2 placing a crown on E.T’s head. In 1997 when Star Wars was re-released and added to its total gross box office takings, it re-took the top spot. Once again, Spielberg took out an advert, this time showing a long line of cartoon caricatures lead by E.T. with R2D2 zipping past them all to the head of the line.

There are so many other subtle Star Wars references in Spielberg’s movies including a gremlin playing a Star Wars arcade game, a review of Star Wars in a paper clipping in the already mentioned Close Encounters, Goonies playing a Return of the Jedi game in a deleted scene and lots more.

Star Wars affected my childhood for the better and has influenced me in a large way throughout my life. In my work I am known as THE Star Wars geek which I don’t mind and, whether it’s a good thing or not subtle references creep into my work via email or conversation. If it’s good enough for Spielberg it’s good enough for me.

Once a fan always a fan.