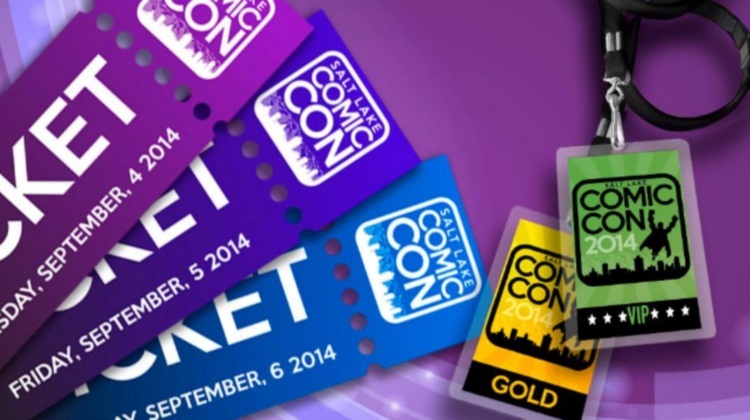 Only a few more days until Salt Lake Comic Con and I can’t wait! This is the weekend when I act like a kid more than my kids, and my wife questions why she married me. In April my wife, Jana, and I attended our first comic con at the Salt Lake Comic Con Fan Xperience. We were two of the 100,000+ fans attending SLCC making it the largest convention of any kind in the state of Utah and the third largest comic con in North America. I couldn’t believe it! I had no idea there were so many Star Wars fans (and geeks in general) out there. I’m not one to go to message boards or chat rooms to discuss Star Wars, or anything else for that matter. I made my wife and kids talk Star Wars with me. And I also had no idea there were any Star Wars podcasts available. Yet.

Salt Lake Comic Con was one of the coolest things I had ever seen! There were fans dressed up like Jedi Knights, Sith Lords, Iron Man, Gandalf, Black Widow and Wonder Woman. We were able to see R2-D2 (and get a picture taken with him), Billy Dee Williams, Jeremy Bulloch, and Daniel Logan, as well as the Mandalorian Mercs and the 501st Legion. We also went to several panels with Star Wars as the topic. It was at one of these panels that I finally heard about Star Wars podcasts and I’ve been a Coffee With Kenobi addict ever since.

On Friday of Comic Con we took two of our sons with us and they got to meet Iron Man, Captain America, Stormtroopers, TIE Fighter pilots, Darth Maul, and got to see a 10 foot tall walking AT-ST. Sure they were just fans dressed up in costumes, but my kids didn’t know that or they were so excited that they just didn’t care. And the costumed fans were so polite and willing to take pictures with my sons that they were convinced they were meeting their heroes. My 5 year old wanted Iron Man to blast off in front of him and genuinely thought he could. And with all of the booths and vendors my kids felt like they were in the biggest toy store in the world. And so did I! I loved seeing all of the Star Wars action figures in carded mint condition that I had (and still have) when I was a kid. Mine have long since be opened and played with, though.

My kids even got to be trained by the Power Rangers Samurai. The real actors from the TV show. Then they stayed after the training session and took pictures with and signed personalized autographs for my sons. They were thrilled! That in itself was worth buying tickets to Comic Con.

As fun as the last Salt Lake Comic Con was, I’m even more excited for this week. I’m looking forward to seeing Sam Witwer (the voice of Darth Maul in the Clone Wars series and Galen Marek/Starkiller in The Force Unleashed video game), more Star Wars toys (hopefully some from Star Wars: Rebels), the Star Wars land speeder, cosplay, panels, and especially Han Solo in Carbonite!

Last night my wife and I took our three sons to the Ogden Raptors (our local minor league baseball team) game. It was Raptor Con Night, a pre-Salt Lake Comic Con event. There were several people dressed up as superheroes and Star Wars characters. The Raptors even wore Superman-themed jerseys. It has been so great to see how Salt Lake Comic Con has included all of Utah. In a recent estately.com it was determined that since Utah has the most nerds per capita it is the Nerdiest State In America. The excitement keeps growing and I can’t wait to see where it goes from here.