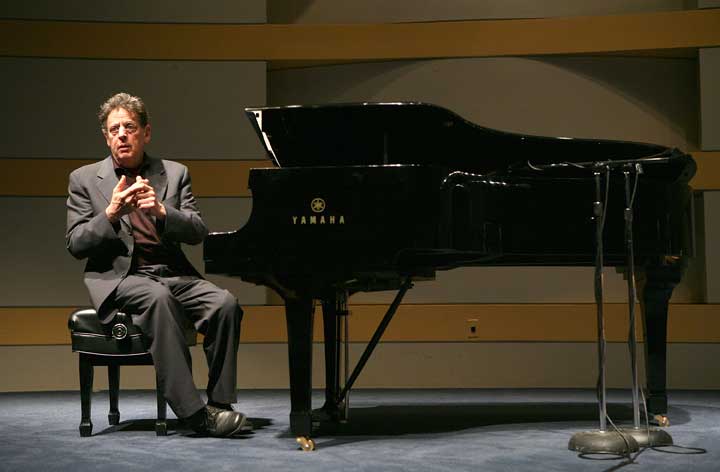 Philip Glass. A name I was not familiar with until about this time last year when his music became an inspiration for the music in an episode of Star Wars Rebels called “Legends of the Lasat.” If you’re a watcher of Star Wars Rebels then you’ve probably noticed more Philip Glass inspired music this season—check out any episodes with Grand Admiral Thrawn. This was the spark that caused me to watch a documentary called Glass: A Portrait of Philip in Twelve Parts. Born in 1937, Philip was a product of the 60s—meaning that any artistic expression was welcome—no one was excluded. Maybe not every one was accepted as being good, but it was a time when artistic freedom was at its peak. This was the case for 30-year-old Philip who didn’t care if his music was enjoyed or not, he just want to write what he liked; What he thought was good:

Philip Glass wrote compositions that pushed the boundaries of what was musically accepted. It was polarizing. His music has been labelled minimalist”, and it may even sound repetitive at times. Many loved it, some loathed it. I’m not in love with his music, but I admire the man’s originality, artistic ability, and his laissez-faire attitude towards those who may criticize him. He does what he wants without regret, and as an aspiring writer, that definitely struck a chord with me. This is what I want to write. Will it be liked? Who cares?

As I’m watching this documentary, it reminded me of two things; Lucasfilm, a production company that revels in pushing the limits of filmmaking, storytelling, and special effects. Glass has the same pioneer spirit shared by many at Lucasfilm, which it retains from its creator. George Lucas, who also lived through the 60s creative boom, as we know, was a filmmaking pioneer whose last concern was will my film be liked and accepted. I don’t think it’s a coincidence that these two creative geniuses possessed the same kind of ambition and drive. It makes me wonder if the two ever met. Now that’s a conversation I’d love to hear!

Like Lucas, Glass’s list of influences is quite substantial. Take his spirituality for instance. Glass practices Qi-Gon and Taoism from one of his spiritual advisers, and receives spiritual guidance from his other friend and Buddhist, Gelek Rimpoche. Glass denies that he is any one religion, but that he is many:

“You might say I’m a Taoist, Hindu, Jewish, Christian. It’s true I’m interested in all these things. But I can’t say I’m exclusively anything.”

This brings to my mind a young Lucas asking his mother, “If there is only one God, why are there so many religions?”

Philip is a man of his music. Much like George, he has no love for Hollywood. At one point in the documentary, his cell phone rang in the middle of an interview, in which he quickly rejects the call, stating, “It’s someone from Hollywood. I don’t want to talk to them.” Then he lets out his contagious laugh. One particular moment in the documentary I thought was especially interesting, was when Glass organized a concert in Australia in which he assembled different solo artists from every continent. There was a sitar player from India, a biwa player from Japan, among others—and it’s this kind of musical collaboration that makes Philip Glass not just fascinating as a composer, but it shows how much he is still a student of his craft. He is not restricted to western philosophy or western musical influences. He has the wherewithal to realize the shortcomings of using only one musical style and branches out. Again it’s this experimentation that allows him to learn from it and composes music with an entirely new outlook.

I’d be remiss if I didn’t mention an experimental film from 1983 called Koyaanisqatsi, directed by Godfrey Reggio. Philip Glass wrote the music for a film in that included slow-motion and time-lapse images of scenery across the United States. After an episode featuring some Glass inspired music, Pablo Hidalgo tweeted this:

“Anyway, if you haven’t made the score to Koyaanisqatsi part of your mix and sit around wondering what music plays in Thrawn’s head, get it.”

Every once in a while we are blessed with an artist who doesn’t do what they do for any benefit of their own other to create. They may not understand completely what a profound effect it has on their audience, but as I see it, art of any form is our gift back to nature.