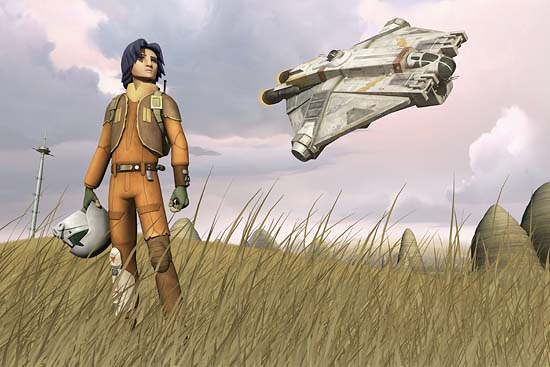 In Star Wars Rebels, fans will see the rise of the Rebellion through Ezra: a 14-year-old con artist who learns to fight for a greater good. The seemingly-reluctant hero is revealed here in a video filled with character concept art, early animation, and creator interviews.

Growing up on his own in the age of the Empire, Ezra has had to rely on his wit and cunning to get by. As voice actor Taylor Gray explains, “He’s very street-smart, he’s a pickpocket, he’s a little thief. But he’s doing it all because he needs to survive.”

Executive producer Dave Filoni adds that Ezra is not a bad kid. Although he may enjoy stealing from the Empire, his behavior has been influenced by the world around him – a world that is under Imperial control.

But his hard life has also made his world smaller. “He doesn’t really trust anyone,” says Rayne Roberts, creative executive of Star Wars Rebels. “That’s kind of his motto in life. He has that hard edge at times.” When audiences first meet Ezra, he is not yet a Rebel and is not yet interested in restoring freedom to the galaxy – but that will soon change when Ezra is introduced to his new surrogate family: the crew of the Ghost.

Greg Weisman, executive producer, says, “His eyes get opened to the fact that there are people who care, who are trying to fight the good fight. And he becomes one of them.” Still, there is more to Ezra than even he knows.

Ezra is Force-sensitive, Filoni reveals, though he is unaware that he is tapping into this mystical energy field. Ezra knows he has some strange abilities, but they’re “instinctive and reactionary.” It is only through his relationship with Kanan, a Jedi Survivor and crew member of the Ghost, that Ezra will learn the true nature of his power. Together, they will forge new paths and destinies – and a rebellion will rise.

Star Wars Rebels is scheduled to premiere in fall 2014 as a one-hour special telecast on Disney Channel and will be followed by a series on Disney XD channels around the world.