Years ago, there was an amazing English teacher in my high school that treated us students a bit differently – like people who could think analytically and judge the merits of ideas and experiences. I think I did some of my best academic work for him, and quite often, Mr Wentworth comes to mind when I am contemplating Anakin’s ultimate end (for now) on the Second Death Star. Mr Wentworth questioned how redemption was offered and possible for Anakin at the end of his life since most of his life had been in the service of darkness and evil. It is indeed a tough question. Does it give us the possibility of living a terribly immoral life and stealing a space in Heaven through a few words? If so, then where is the motivation for goodness in this world? I think the answer is much deeper and existential.

We are called to be unified to the light side in this world. To do good, to love others more than we love ourselves, and to give all that we have for the welfare of our neighbor. To be virtuous, moral, compassionate, beings carrying the image of the divine. Those things call us to empty ourselves of selfishness and deception, both of which might be seen as virtues in our modern society. When a lone Jedi fights against the Code of the Order, it leads to personal pain with repercussions on all involved. This is seen in the way Anakin’s relationship with Padmé progresses (there has been a fair bit written about the unenviable pathology of that union). It is when the will of the person and the will of goodness align that true joy and eternal happiness are found. I think of the examples of Qui-Gon and Obi-Wan when ruminating about those who have lived the good Jedi life and aligned their wills to that of the Force itself. 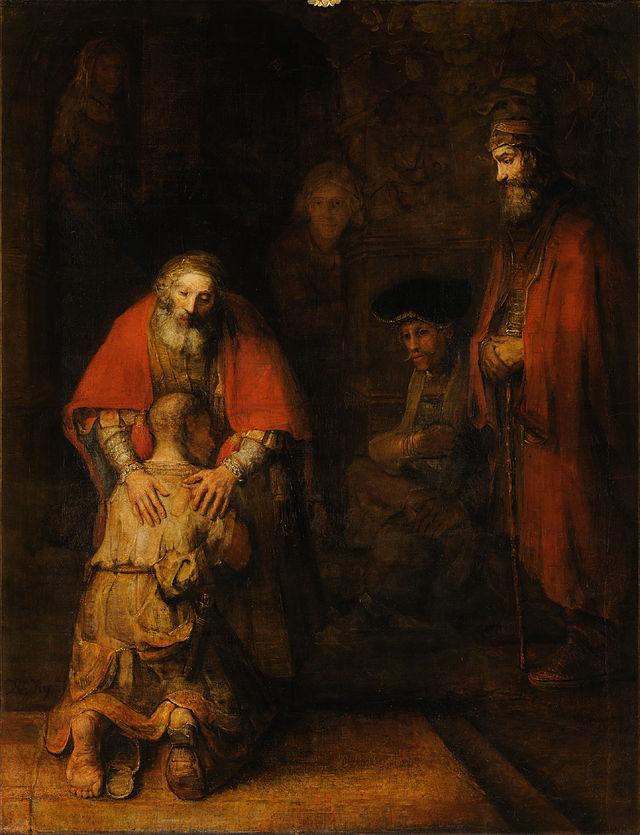 A few weeks ago, a friend gave me a framed poster that has really got me thinking further about the good life and the potential of redemption from one’s sins. The more I look at it, the more things I see. It is called The Return of the Prodigal Son and was painted by Rembrandt some time right before his death in the mid-17th century. The Parable of the Prodigal Son is a common enough story that I think many people know it (and ought to, if they are thinking deeply about the tragedy of Anakin the Fearful). A father has two sons. The younger takes his inheritance while the father is yet alive, and blows it all on loose living. Finding himself in a sad state, he goes back to his father in full repentance. His Father embraces him and holds a feast in his honor for his return. The older brother, who never left home, becomes very jealous, finding no joy in his brother’s return. The father tells him that all should celebrate the return of a fallen brother.

In the painting, we see the moment that the son is embraced by his father. Our eyes are naturally drawn to the lighter parts of the scene. First, the bright and loving face of the father as he receives his long-lost son. The younger son, just back from doing terrible things, is truly and humbly penitent. We can hear the depth of sorrow and turning of the son in the words of one of the hymns of my Church, “When I think of the many evil things I have done, wretch that I am,/ I tremble at the fearful day of judgment./ But trusting in Thy living kindness, like David I cry to Thee:/ Have mercy on me, O God, according to Thy great mercy.”

Our eyes then drift over to the right side of the scene. The older brother who is jealous that forgiveness is so easy. He also does not think about the thing in his own heart that he may need to excise. After all, he has his rights! Here is the celebrated question – how is it that the son who lived a God-pleasing life in all respects, and who faithfully served his father, could display such envy? This is because the older son had everything given to him in order to love the father, but made an idol of his blessings.

We drift further back into the painting and see the attendants of the household ready to obey the commands of the father. What should they do? Put the boy in prison or prepare a feast? Feast, of course! The son was sprung from the prison of his own making. But keep looking. More witnesses appear from the background. A man emerges from the shadows and then a woman a few steps above all. They are the witnesses to the greatest miracle ever to come from a human – utter penitence for profligate living that is met by absolute forgiveness from the father.

So, on our circuitous route (which is either a function of my brain or the Orthodox way of teaching), I hope you have seen that Anakin’s place with the blue shiny people is not mere sentimentality. It is the embodiment of a true change of the soul and self sacrificial love. Redemption is not about the magic formula of saying the right things before expiration, but the true turning of the depths of the soul to what is good. With Anakin losing the mask of hatred and destruction, the scars of his battle filled life are still present on his face. However, his heart had truly turned from that evil. The unending love of his son was enough to win him back.