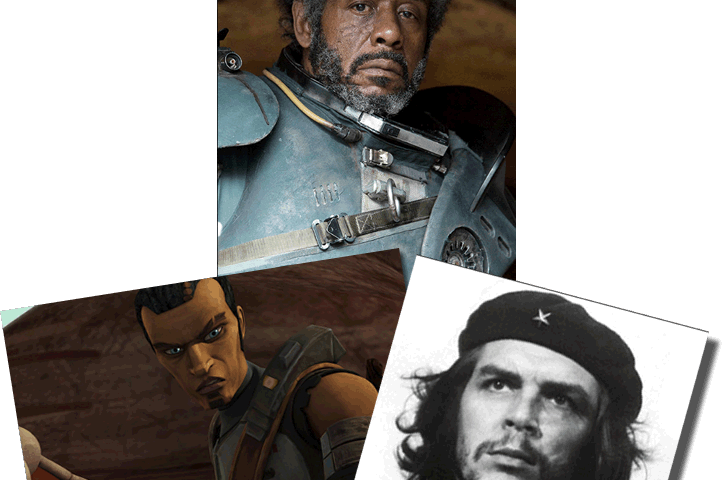 Anyone who has studied George Lucas, and his approach to the Star Wars films, is no stranger to his propensity for Earth historical and mythological inspiration serving as the development of plot context, characters, and costuming. One only requires a review of the celebrated work Star Wars: The Magic of Myth by Mary Henderson (1997) to bear witness to an inveterate study and appreciation of these subjects when crafting the best of those tales that transport us to a galaxy far, far away. So when 2012’s Clone Wars Season 5 “Onderon” story arc introduced audiences to what was deemed as the origins of the Classic Trilogy’s Rebel Alliance, which also featured a new character dubbed “Saw Gerrera,” many fans online (including myself) and in the podcasting world leapt to the conclusion that Lucas — who personally spawned the new character and the unfolding scenario (Radcliff, 2016) (Breznican, 2016) — wished to draw upon the issues and legacy of Ernesto “Che” Guevara de la Serna. An exploration of the “Onderon arc” suggests that Lucas also wished to use his universe to explore the morality of armed resistance, larger societies engaging in proxy wars, and how these decisions may affect the sojourn and its practitioners over time.

How closely drawn is the character of Saw Gerrera (who will be portrayed by celebrated actor Forest Whitaker in December’s Rogue One) to the historic Ernesto Guevara? Are there additional parallels in the Onderon Arc to the 26th of July Movement in Cuba? Obviously, the evidence suggests only a cursory association with each of these, as Lucas draws upon historical people and events as inspiration for the stories he wishes to tell, and the discussions he wishes to raise. For example, though little is known about Saw, and nothing about his past prior to the Jedi arriving on Onderon during the Clone Wars has been shared, thus far there are no hints that suggest he was born to an upper middle-class family, thrived as an intellectual, loved literature, finished medical school, or even suffered from asthma. Neither is Saw a foreign-born revolutionary. However, there are a number of interesting parallels — each of which not only provide for great storytelling, but also serve as the potential for nuanced development concerning the Rebel Alliance’s origins, which up to this point has been elucidated by idealistic affairs and personalities. The use of Saw and Onderon also serves as a cautionary tale for when larger powers engage in proxy wars to serve their immediate needs, only having to engage those same fighters in future conflicts.

When audiences first meet Saw, his sister Steela, and the inchoate Onderon rebellion, their planet has come under the authority of a corrupt king, who has aligned himself with Count Dooku and the Separatists. The legitimate king was neutralized, the Separatists detach a military presence on the planet, and a very small group of Onderonian fighters engage in open rebellion against these developments, but are driven deep into the dangerous wilderness of the planet. Not exactly the perfect analogy for Fulgencio Batista, or his 1952 coup d’etat, but there is the notion that a small group of rebels, equipped with simple firearms, are expelled from their society, and engage in hit-and-run guerrilla tactics against a superior force while camped in a remote stronghold amidst their world’s verdure. Guevara’s concepts for guerrilla warfare, to which he deemed foco, and documented in Guerrilla Warfare: A Method (1961), extol what he believed to be the virtues of rural-based armed resistance that employ small groups of highly-committed and disciplined fighters who were supremely motivated, but also must exhibit a level of honor and valor superior to that of the regime in its crosshairs (McCormick, 1997) (Beckett, 2016). For Guevara, one could only enact change through armed struggle, but they must also be able to convince the peasantry, and the general population, that their movement was in control, and that those in power were corrupt (McCormick) (Beckett). Provoking outrageous responses from the government would feed into the characterization of the rulership the rebels would propagate among the peasants — using radio broadcasts and printing presses — that would counter any government-inspired negative propaganda. Though the Cuban Army numbered 50,000, and was trained by the U.S., Guevara and Fidel Castro were able to lead a successful revolution with less than 20 fighters under their command (Dent, 2016). Of course, Guevara’s ideas don’t completely explain the success of the Cuban Revolution. Guevara downplayed the politics and the urban networks Castro massaged in order to successfully gain the trust of the Cuban people, and to also acquire the necessary supplies and equipment to weather Batista’s troops (Beckett) (McCormick) (Sánchez, 2016).

As with “Che,” Saw Gerrera is also a man of action — brash and bold, basking in the piquancy of taking up arms in favor of a noble cause. As exhibited with Guevara, Saw is not patient with politics, politicians, or anyone resembling what Ernesto referred to as guatacas (“brownnosers”) (Anderson, 2010). During training with Republic military “advisors,” he admonishes the resident diplomat Lux Bonteri, when Lux seems incapable of carrying his own weight. “Sit down, boy, this isn’t the Senate. You’ve got no talent for this!” When Lux reminds him that it will take more than brute strength to defeat the Separatists, Saw responds with, “Politics have failed us; we’ve got no choice.”

Though much of the strategy and actions on Onderon emanate from the Jedi advisors, and from Saw’s sister Steela, the game plan enacted also bares a cursory resemblance to what was witnessed during the successful Cuban campaign. While the rebels harassed the Cuban Army from the Sierra Maestra mountains, gaining the trust of the peasants along the way, the Batista regime responded with a number of atrocities targeting an increasingly suspicious population. Equally, King Rash of Onderon responded to the budding rebellion in ways that only confirmed the message the rebels sewn among the people. The third episode of the Clone Wars arc, entitled “Soft War,” witnesses a Star Wars equivalent of Radio Rebelde and El Cubano Libre in which the group sets up a series of giant holo-messages assuring the people that they aren’t simply causing mayhem, but striking back at a corrupt regime in the hopes of restoring Onderonian independence. The previous king, Ramsis Dendup (held captive by King Rash), also reminds Saw that the people must be persuaded to stand up to Rash and the Separatists if their movement is to be effective. Once freed by the insurgents, he too participates in the spreading of these messages. While cultural revolutions are an old concept, the term “soft war” gained a lot of traction in foreign policy discussions back in 2009 (not long before these episodes were written) because of the Iranian government’s use of the term to describe their cultural war against its own population to curb further rebellion witnessed that year (Worth, 2009) (Dobriansky & Whiton, 2009). The Onderonian rebels, however, were able to control the narrative surrounding Rash and Dooku’s forces. This not only persuaded the people at large to engage in open revolt of their own volition, it also persuaded the military (led by General Tandin) to mutiny and join the resistance — a development that afflicted Batista as well.

The experiences of the Cuban Revolution hardened Guevara. As head of La Cabaña Fortress prison, he was responsible for the summary execution of possibly more than 500 Batista supporters (“Che Guevara: Fast Facts,” 2016) (Che Guevara, 2016), and also spearheaded the decision for the Russians to arm Cuba with nuclear warheads. Already execrated among Westerners, subsequent events even rendered him a polarizing figure among many fellow communists. Though the details are scarce, heading into Rogue One, it appears that Saw has also become a polarizing figure for the Rebel Alliance. We do know that Agent Kallus, of the TV show Star Wars Rebels, tells a dark story of encountering fighters under Gerrera’s command — to which he barely escaped with his life. We also know that, decades after the Empire was defeated, Saw’s campaigns were remembered by some for using “terrorist tactics,” difficult to condone (Gray, 2016). Of course, the teaser trailer itself for Rogue One has the character probing the very question this author has raised: “If you continue to fight…What will you become?” (Star Wars, 2016) It appears that those in charge are continuing the trajectory Lucas laid forth for the character.